One of our directors, Matt Ball, was deployed to eastern Europe as part of Counsilman-Hunsaker’s retainer for risk management and operations consulting with Norwegian Cruise Line. 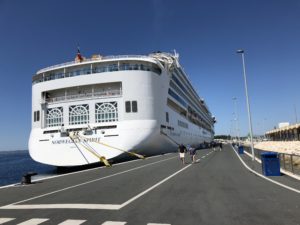 Matt flew from Dallas through Rome to board the Norwegian Spirit in Trieste, Italy for two days to provide onboard consulting for the newly deployed lifeguard crew members on board and meeting with the Safety Officer, Hotel Director, Doctor, and Staff Captain to help onboard the new lifeguards, provide an in-service training, scheduling assistance, and clarification of the Standard Operating Procedures.

When Counsilman-Hunsaker Project Managers are aboard the Norwegian cruise ships, they possess both passenger and crew credentials, allowing them to utilize all the guest areas, amenities, and restaurants, but also allowing entry into restricted crew-only areas. Additionally, while our Project Managers often are able to stay in a guest stateroom during their time aboard, Matt ended up staying in a crew cabin on deck three because the cruise was fully booked.

Matt debarked the Norwegian Spirit in Korfu, Greece to board a plane to Bologna, IT with a final destination of Skopje, Macedonia, but ended up stuck overnight in Bologna, so he had to complete the trip the following day, flying through Munich, Vienna, and then on to Skopje. 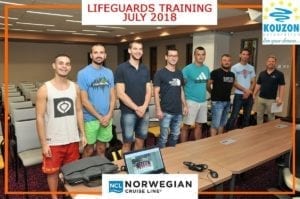 In Skopje, Matt conducted an American Red Cross Lifeguarding class over four days for future Norwegian Cruise Line lifeguards who continued on for another intensive five-days of training, care of Kouzon Corporation, that included Fire Training and Basic Safety Training. Kouzon also provided hotel, meals, and the training accommodations for Matt and the trainees.

Skopje is a historically significant city with a city population just shy of 1 million that blends historical landmarks, ancient fortresses, statues, and medieval streets with modern malls, hotels, and architecture, as well as cultural institutions, including museums, opera houses, theatres, and concert halls. It is a sister city of Tempe, AZ and Pittsburgh, PA.

Additionally, Skopje is the home of the Millennium Cross, a 66-metre tall cross on the top of Mt. Vodno, the tallest cross in eastern Europe, and is the birthplace of Mother Teresa. 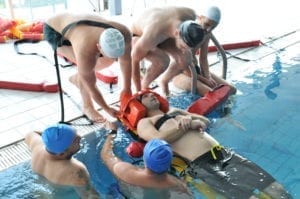 The classroom sessions were held at the Zan Mitrev Hospital “Auditorium”, a beautiful lecture room facility utilizing presentation streaming technology perfect for the Lifeguarding presentation and videos and with plenty of space for CPR/AED and First Aid skills practice.

The pool sessions were held at the Boris Trajkovski Aquatic Center, a 25-metre, 14-lane indoor pool facility with a separate three lane therapy pool. Interestingly the dress code for the aquatic facility was “speedos and swimming hats”.

All the course participants were certified in American Red Cross Lifeguarding/First Aid/CPR/AED with Bloodborne Pathogens training and will be deployed as Lifeguards onboard various Norwegian Cruise Line vessels within the next few weeks.

Matt made his way back home on Saturday, July 21 after a ten-day trip and just as many flights and is excited to share his experience and pictures with our friends, colleagues, partners, and clients!