Joe Hunsaker had been around swimming pools ever since his freshman year at Cleveland High School in South St. Louis.

With a newly discovered talent in competitive swimming, Joe Hunsaker pursued his flourishing interest, proceeding to win four State Championships and a swimming scholarship to the University of Illinois. He competed in collegiate and non-collegiate meets, setting a World Record in the individual medley and several National records along with three National Championships. After a stint in the army as a company commander, Hunsaker returned to St. Louis, where he joined a design/build pool company. With the rapid expansion of the St. Louis suburbs in the 1960s, he became involved in building, and later, the management of public swim facilities. His pool management company, Midwest Pool Management, operated 66 pools when he sold it in 1975, leaving five summer swim and tennis clubs, under his ownership. 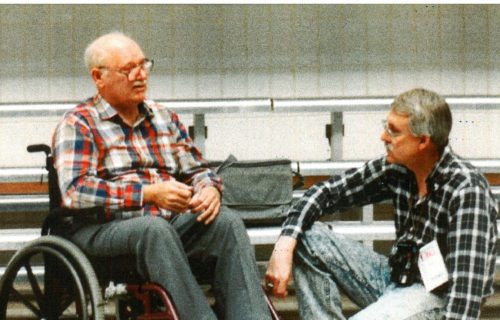 An attempt at semi-retirement left Joe Hunsaker restless. He increased the consulting business with lectures and writing on pool design. He also started assembling a staff of architects and engineers with an interest in designing pools and poolscapes. The group is widely renowned today as Counsilman-Hunsaker. Over the years, Hunsaker built a stellar reputation by designing pools for competition and leisure. In 1999, Scot Hunsaker purchased the firm from his father, but Joe remained a strong voice and mentor both at the firm and in the aquatic industry up until his passing in early 2012. Joe was known for sharing his thoughts in numerous memos to staff and colleagues titled “For What It Is Worth.” A selection of these nuggets of wisdom with a healthy dose of wit and humor are shared on our blog.